Currently I have consumed the following beef and dairy per year


This means my CO2 equivalent from beef and dairy last year was about 1,630 kg

These numbers are all based numbers specific for BC.

I also eat about:
By far the biggest single source from beef.

This or course would be dramatically different if I fly anywhere this year or if I end up with a car again.

Posted by Bernard at 1:46 PM No comments:

I will help you can and do home preserving

I walk around the neighbourhood and I see all these apple trees that are not being picked.  It seems such a shame because so much could be done with these apples.   I have already made more apple sauce that I will eat in the next year from neighbours apples but I still want to see the apples and other fruit used.

I am more than happy enough to come to your home with Victorrio Food Mill and all the canning equipment and help preserve your fruit and vegetables.  Just drop me a line.
Posted by Bernard at 2:01 PM No comments:

Labels: Cooking from scratch at home, Food Security Issues and their Ilk, garden

Using a Victorio Food Strainer to process some blackberries

Posted by Bernard at 9:12 PM No comments:

If you want some, please drop me a line.  I live right by Tillicum School
Posted by Bernard at 11:01 AM No comments:

What to do when a neighbourhood restaurant is not doing well?

I am in a quandary, I would prefer not to post a nasty review of a restaurant on this blog but do I do when a restaurant seems to just have given up?   I only have one restaurant within 500 meters of my home, at 750 meters there are five more.  It means if I want to eat out quickly I only have one place, it is unfortunate it is no longer a serious choice for eating.

The place I speak of is a restaurant I used to go to very regularly when it was well done and had good food but it has not been very good for sometime.   The fact it has become mediocre means I now only rarely go there. I went there last night with my son and I was underwhelmed.

There was a time when it was really hard to get a seat at this restaurant between 6 pm and 7:30 pm.   You could not park because every space was filled.  This is no longer the case.   On a Saturday night at 6 pm the restaurant was more than half empty.

The price has risen much faster than the rate of inflation over the last nine years, more than a 50% increase since I have lived here.  If the quality had remained as it was at its best this would not be that much of an issue, but the quality is sub par.   The food is bland and greasier than I would normally expect.   I could make better at home and have only come here to avoid cooking.

The big thing I noticed this time is how grimy the place has become.   The tables have small plastic displays for a liquor product.   I grabbed one to read more closely and it was greasy.  Not just a bit dirty but really greasy.   There were two on our table and both of them were unhygienic.  I looked around the restaurant and saw this was the norm.  How do you even manage to get these plastic displays this dirty?  Why would you not make sure they are not clean???

It made me look more closely at the restaurant and I noticed that cleanliness over all was lacking.   I could see caked up dirt in the corners of the floor.  The carpet was not very clean - it is also threadbare in a way that says there is no interest in trying to be the best that it can be.

I looked at the VIHA report for the restaurant and see that it has had some issues over the last year, only one very serious, but that one concerns me.  It is easy for most places to have a couple of minor violations but to see an ongoing trend worries me

So I have low quality food, a sense that cleanliness is not #1 and a general sense of tiredness and not trying very hard.   I would like to eat locally, bit I am not going to pay over the odds for food that is not well done in a place that looks less than ideally clean.

So, should I go talk to them and tell my concerns?    Part of my thinks I should but another part has not time for the possible confrontation that might arise.
Posted by Bernard at 4:25 PM No comments:

Wild Thyme Coffee House - I am impressed with this 1963 Leyland double decker bus converted into a coffee house on Saturna Island.   The idea of a converted bus as a restaurant is so 1970s Gulf Islands and should worry you that it could look sort of run down hippie, but they have done an amazing job, the bus looks beautiful.

The space has been open for a year now.   We missed lunch but the cappuccino I had was very well done as was Ben's London Fog.   I was pleased to see they use beans from Yoka's in Victoria, formerly of Kitsilano.   I have been drinking Yoka coffee for several decades now.

Upstairs on the bus has seating for eating though the one end is more a funky casual coffee house lounge type area with a selection of books and board games.   If I lived on the island this would quickly be my #1 hang out.  My son Ben who will be going to school on Saturna at SEEC in the second semester of this year sees it as an equivalent to Spiral Cafe in Vic West.

The video does a good job of giving you the flavour of the place.

The Latest Cake Masterpiece from Sheila

Stephen wanted a DnD cake for his birthday and this is what Sheila made on the weekend.

I have got to learn hot to take better food pictures.   These cakes are so much better in reality than what these pictures show. 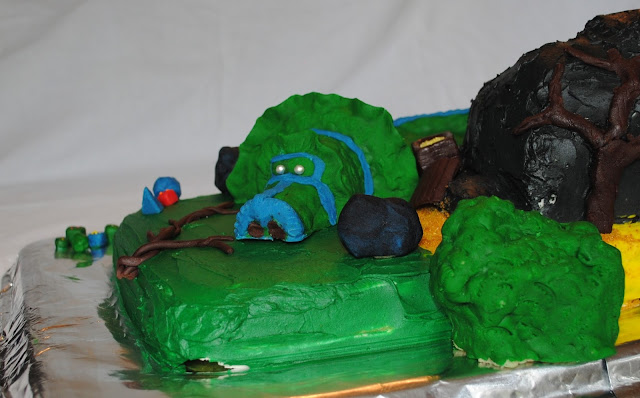 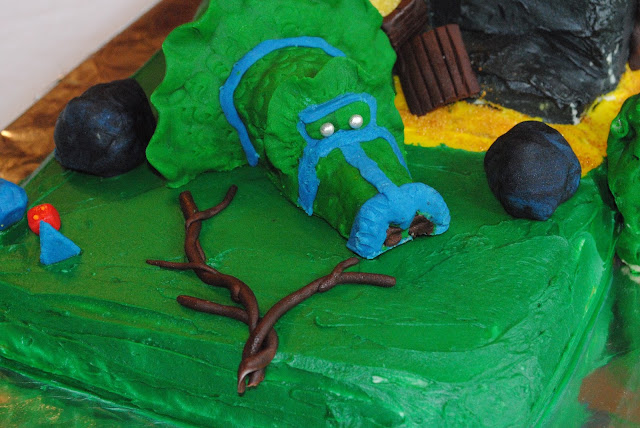 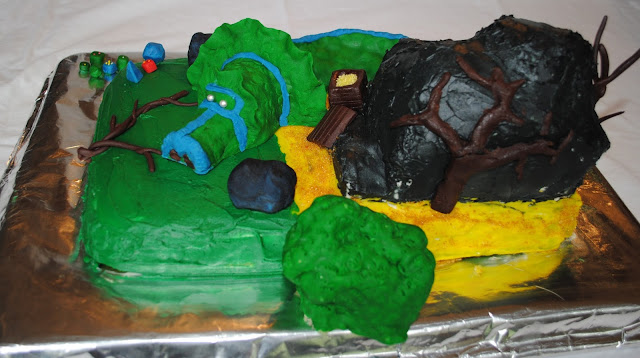 Posted by Bernard at 9:34 PM No comments: